The traditions of Christmas are something of wonder for little kids growing up. Decorating the Christmas tree, hanging up your stockings by the fireplace, and perhaps the yummiest of them all, leaving out milk and cookies for Santa. While a lot of these traditions can be confusing for kids, nothing makes more sense to them than leaving some cookies and milk out for Santa. Of course you would leave him some cookies! He’s working hard isn’t he?? And with all the free gifts he’s about to give you, it’s the least you could do for him. 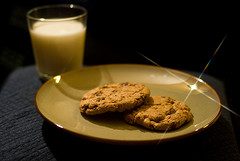 All that being said, where and how exactly did this tradition begin? Well, it turns out that the origins are a bit unclear, but there are a few theories. This delicious custom may have started with St. Nicholas in the Netherlands, where during the December 6th feast, children would leave food and drinks for Saint Nick, hoping to exchange them for gifts overnight.

The history of the milk and cookies tradition is also thought to be closely linked to the history of the Christmas tree. The people of Germany used to decorate “Paradise Trees” with apples, wafers, and cookies, and soon merged with Christianity to become what is known as the modern Christmas tree. You can’t expect Santa to stop by your house, drop off your presents, and NOT take a bite of a delicious cookie waiting for him on your tree! Even though people eventually dropped the tree snacks custom, the idea of leaving Santa a little treat still stuck around.

The U.S. has a much different story of how cookies and milk for Santa came to be. Believe it or not, for us, this tradition is directly related to the Great Depression. During these tough times, parents wanted to instill the virtue of sharing in their children, and what better way than Christmas to do the trick. Leaving cookies, milk, and snacks for Santa and his reindeer helped inspire children to give amongst each other, and hopefully ease the pain of the times.

While the origins are disputed, the only thing that matters is that the tradition continues. No matter how good you have been this year, why not give Santa a little bit of extra convincing while he’s standing out on your roof this holiday season.

This site uses Akismet to reduce spam. Learn how your comment data is processed.